Zoom Out and Pan Around - Part 1

I feel sometimes we need to step back from the daily barrage of articles and headlines to see if we can get a look at the bigger picture unfolding. I am aware that there are a number of major pieces at play publically. While they are treated separately I feel that are merely individual chords in a diabolical harmony.

I have decided to follow the example of James and break these areas into multiple posts as I made a complete hash of rolling them into one. It stank.. really!


Middle East and the Arc of Crisis 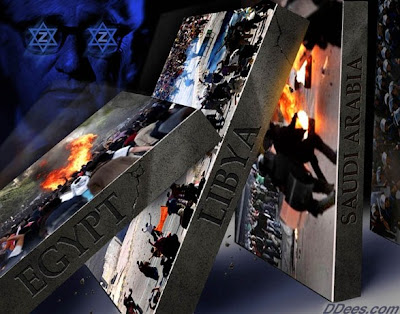 Source David Dees via Rense
We are all aware of the current events in North Africa and the Middle East. There has been some great writing on these events from more astute observers than I - James, A.P., Penny, Aangirfan and now A13.

Discord, distrust, destabilisation and death are the order of the day. We need to develop some special 4-D specs to see the threads of this plot. What will happen in Libya? What is the planned outcome? Gaddafi’s days in power seem to be numbered but who knows?

The British spooks have wanted him gone for a very long time. They were happy to murder a British Policewoman (PC Yvonne Fletcher) back in ’84 to start a plot to oust him. They framed him for the La Belle bombing in ’86 as a pretext for Ronnie to kill him using the US Air Force – via British air bases. Dropping multiple 1000 lb bombs on his tent is a little excessive. Murdering his young niece certainly brought home the message.

They framed him for the Pan Am Lockerbie bombing also in ’86. The press squealed like the pigs they are when Al-Megrahi was released on humanitarian grounds due to ill health. The fact that his appeal court case was due to be heard was completely ignored. That would have publically aired lots of dirty laundry for the US as well as the British. All of it is now safely down the memory hole.

David Shayler (shylock?) blew the whistle on an MI6 plot in the later 90’s where they paid ‘Islamic Extremists who have connections to Osama Bin Laden's Al Qaeda network’ to try to kill him. Call me gullible but I see a thread there.

I have always had a soft spot for the old dictator ever since he sent a few boat loads of arms to my fellow countrymen back in the day - 400 tonnes worth of payback. My guess is that he will get the Ceaucescu treatment – the sooner the better. That won’t be any use to the hundreds or thousands of dead Libyans. Either way their deaths will still further the agenda of the puppeteers.

When the ‘War of Terror’ (deliberate spelling) was started by the neo-cons Gadaffi saw what way the wind was blowing and made nice with the Globalist gangsters. Blair came along and greased the wheels. The rest of Rothschild’s paid lackeys could not accept his money quickly enough. A little embarrassment all round on that one at the moment.

I see that Perfidious Albion has sent in their spec -ops SAS to Libya – on humanitarian concerns. That’ll be nostalgic for them. They developed out of the Desert Rats of WWII fame. Similarly the US warships sailing around the Gulf of Sidre threaten a replay of ♫..From the halls of Montezuma, to the shores of Tripoli ♫ for the Marines. Watch out Mexico.

Currently there are no reliable (non MSM) sources of information. If I make the mistake of catching the MSM coverage here it’s swarming with think-tank types and eager beaver NGO paid ‘youths’. Many of them have excellent english accents. The many reporters on the scene can fill in any of the juicy details (ie make it up) for the viewers back home.

The talk now is of a ‘project for a new Arab century’ from the ol’ Jazz network. It talks of ‘the birth pangs of a new Middle East are being felt ‘ - smell familiar? Every opportunity is also taken to have a pop at Iran in the vain hope they can rekindle the failed colour revolution from last year.

I read this morning that US, British and French ‘defence advisors’ are now in place in Libya. Even the Indian navy is in on the act. I bet you didn’t know they could project naval power. The prospect of Indian involvement widens the scope all the way to Pakistan.

Libya is lost. All the players are now there to incite and promote civil war while NATO forces guard the oil installations. Egypt and Bahrain are also crucial to US naval power projection. The oil producers are nervously trying to bribe off their restless populations.

All of this is happening in a vast strategic region vital for oil production, global shipping and power projection. From Morocco on the Atlantic Coast to Pakistan on the Arabian Sea we see turmoil and unrest that reaches right to the borders of China.

Pakistan has been the target for balkanisation for many years now. Every attempt at civilian rule since independence has been overturned by the Generals. Musharraf was the West’s favourite puppet until recently. The current civilian government has lurched from one crisis to another.

I listened to an excellent interview recently from Zaid Hamid over at Mark Glenn’s The Ugly Truth. He makes for an excellent analysis of events there and across the region. They are definitely in the cross hairs. What raises the stakes is that Pakistan is the only Islamic Nuclear Power. I have heard rumours that they have sold some to the Saudi’s. They are another story completely.

The Saudi regime has a brutal and dark history. They are not what they seem. They have been the origin and prime promoter of the extremist Wahabbi sect of Islamic teaching. Their power has been increased and consolidated over the last 100 years –guided by first the British and then by the US.

Their oil money has paid for the spread of their madrassas throughout the entire Muslim ummah. All of the fake al-CIA-da bogey men that the zionistas have paraded as examples of ‘islamofascism’ stem from them.

They are regularly guilty of horrific behaviour without a single word raised in the poisoned press. The same crimes if committed by Iran or similar regimes would be howled from the roof tops and paraded daily on our screens.

Most commentary out on the web discusses these events as the work of the US neo-cons and the Zionists. Without a doubt they are but who is pulling their strings. Think of the US as the rook on the chessboard. They can blunder straight ahead or stumble sideways. The Israhelli’s are the bishop and never approach face on – preferring to slip in indirectly. What about the bloodlines – the King and Queen?

I am reminded of Albert Pike's letter to Giuseppe Mazzini dated 1871;
"The Third World War must be fomented by taking advantage of the differences caused by the "agentur" of the "Illuminati" between the political Zionists and the leaders of Islamic World. The war must be conducted in such a way that Islam (the Moslem Arabic World) and political Zionism (the State of Israel) mutually destroy each other”.

A parallel line of thought is in the teachings of Islam. They foretell the coming of a false or fake Mahdi. The Wahabbi’s are certainly prime candidates for me to fill this role. The US has millions of ‘Christian Zionists’ (sic) praying feverishly with their Schofield Bibles awaiting their end-time ‘rapture’. All of the misguided lambs have been expertly led to the slaughter.

I feel that we are making the mistake of focusing on the tactical environment and not watching for strategic planning. We are witnessing the beginning of the globalist’s end game. The bonfire has been building for decades. The Israhelli’s are merrily sitting in the middle of the kindling and handing out matches to all and sundry. Which regime will be the spark, the last domino to start this next, terrible war?

“Who could have believed in the dawning decades of the 21st century that human affairs were being keenly watched and guided by intelligences greater than man’s?

Intellects vast, cool and unsympathetic regarded our Earth with envious eyes, slowly and surely drawing their plans against us.

Few voices were ever raised in warning as, with infinite complacency, men went to and fro over this globe, busy about their affairs……”

A lot has already been written about HG Wells’ famous War of the Worlds. Personally I intend to be the microbe that gives these ‘intellects’ amoebic dysentery.