Zoom Out and Pan Around – Part 2

When I left the first instalment of this brain dump we had Libya in uproar. Progress has been made since and it is now in radioactive, depleted uranium, flames. What a surprise to see the usual suspects murdering civilians but at least the French are now openly showing their colours.

We’ve had couple of months of the deliberately provoked events. We hear of the strategic expansion of NATO into the Mediterranean. We hear also about oil supply and the manipulation of prices.

I feel we are the audience in a conjurer’s tent. We are all watching the hand that’s in motion. We are watching the main performance but the quiet hand recently let slip a ‘tell’. The misdirection almost failed – nearly but not quite.

In all the life and death battles going on in North Africa what are we to make of this story. It seems that the ‘rebels’ are now able to sell tankers full of oil to pay for their sedition and have setup a new central bank to do so. How industrious of them. Did they get help?

On a side note I’m sick of the term rebels. In my mind it is similar to the use of the term settlers when used by the vampires of Israhell. Giving them a nice fluffy romanticised name does not hide their actions. The proper terms are invaders, reactionaries and murderers.

The Libyan war was started by unemployed people smugglers after the Libyans and Italians cooperated to reduce illegal immigration into Europe. Bored, unhappy and armed criminals started it off in the Benghazi area. The sudden influx of spooks and other undesirables (reporters) really got it going.

Back to the main point. Do you remember the list of countries without Rothschild controlled central banks? In 2001 they were Afghanistan, Iraq, Iran, North Korea, Sudan, Cuba and Libya. The first 2 we know well what their fate was. Sudan succumbed recently to a decade of foreign inspired civil war and has been partitioned.

That left Iran, North Korea, Cuba and Libya – until now. Gaddafi is known to be a wily old bird. He is the last of the Arab nationalists still in power. We hear that Israhell is assisting his forces by hiring mercenaries. I have yet to have that conclusively confirmed.

How like the Rothschilds to start and then fund both sides of a war. If Gadaffi survives he will need to borrow funds to rebuild. If the reactionary quisling forces survive they will be run from a central bank. It doesn’t matter if both survive as the arms companies will make fortunes supplying the hardware. Win, bloody win for the dark side once again.

We are now only 3 survivors - Iran, North Korea and Cuba. The hostile forces of the US and its client states are parked off-shore of each one. Remember that the US Navy re-established the Fourth Fleet to coerce countries in the Caribbean and Latin America back in 2008.

Just as AFRICOM was established in 2007 they can’t have Kissinger’s “dumb animals” sitting around bored getting sun tans. The muscle is in place and all that is needed are the trumped up reasons to get the party started.

Nathan Mayer Rothschild once stated;
“I care not what puppet is placed upon the throne of England to rule the Empire on which the sun never sets. The man who controls Britain’s money supply controls the British Empire, and I control the British money supply.”

The first American central bank’s charter ran out in 1811. When the charter was not renewed the puppet British started the war of 1812 to make sure the American’s got the message. Thousands died but In 1816 Rothschild got their central bank.

Only the male heirs of their serpent’s bloodline can hold direct power and they are the ones we know about. Keep in mind that they have had many daughters. The public figures we have placed in front of us as our representatives are no such thing. Check out how many US presidents have been related to one another and to European aristocratic bloodlines.

The main bases of the ‘red shield’ were Frankfurt, Paris and London. They also had Austria and Italy. Paris and London we are familiar with. Frankfurt is the home these days of the European Central Bank. The US has been in safe hands since 1913 thanks to the (un) Federal (no) Reserve Bank.

The American economy is now just printing funny money to cover its war debts – all links to reality have been severed. The European economies are also rapidly swirling down the plug-hole of exponentially increasing debt. Only one thing can save them and that is a nice juicy global slaughter.

When all countries are in their hands the nominally diverse central banks can be unified finally under a new single and global currency. The destruction caused in the coming wars will generate the demand for the remaining survivors to rebuild again under a single master.

This is the primary war plan for our future. They have a religious angle too but I’ll get to that in the next instalment. This has been planned for centuries and is almost in the terminal (in all senses) phase.

This trick has worked twice already. The older order gets remodelled and at each turn under the plastic surgeons knife they think the results suit them better. With each attempt the outcome became more unnatural. That is their undoing. They are not human and more know it with every passing day.

In all the global strategic posturing between the US, China, Russia and the jaded Europeans remember one thing. They all have privately owned central banks – every single one of them. The dogs of war may jostle to see which one gets the lion’s share of the spoils but they all get stroked by the same hand.

If we let them draft our youth into their blood sacrifice we will not get another chance. It’s time we paid attention and learn to bite that hand. If the hand gets gangrene and dies off so much the better for all ours souls.

PS - Here’s a postscript from the Unemployed Kingdom. Due to the giving all our tax revenue to the banks recently (AKA bail outs) the Royal Navy has been stripped of its Naval Air Power and all of the harriers retired early. Here’s the last official flyby by the soon unemployed pilots. 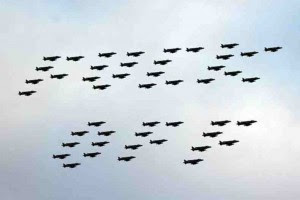 Check out another great video from Max Kaiser especially from the 3:45 mark.

On a parallel thread what about all of the heroin that the CIA and cohorts are exporting out of Afghanistan? Where’s all the money going and what are they doing with it?

The War on/of Terror is BS. The War on Drugs is BS. The whole game’s rigged and everything single thing we have been told is BS. Fear is the mode of controlling the herd – fears that have been manufactured for that very purpose.