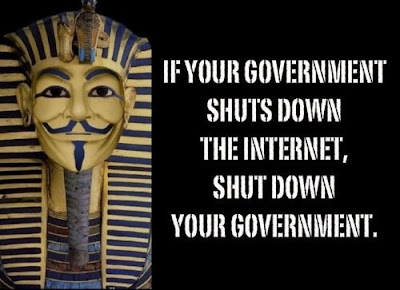 Source for image
(Warning – contains graphic content)
There are many, many things to say about the events in Egypt. I am in no doubt that the spark for the revolt of the Egyptian people was deliberate and external. Aangirfan and Twelfth Bough have been outstanding in their analysis of current events that ‘started’ in Tunisia.

Already hundreds of Egyptians are dead and many more injured. It is a testament to the bravery and determination of the protesters that they have not been intimidated off the streets. Their fate is literally now in their own hands. Therein lies the key to their future. What will they do with it?

It remains to be seen if they will follow the usual fate and be lulled back into waiting arms of quiet servitude. ‘Meet the new boss, same as the old boss’ has been the fate of all such recent uprisings. Chaos and disorder have been deliberately provoked from outside the country. We shall see how the ‘new order’ will be re-imposed.

It will make no fundamental difference to the arsonists that started this whether El-Baradi, The Muslim Brotherhood or some friendly General takes power - friendly to the Zionists that is. They are all known quantities and will change nothing fundamentally.

I take heart from the chatter here on the web that all is not well with the master plan. The Muslim Brotherhood has had little overt influence over the crowds. The pseudo-gang thugs have not forced the desired reaction from the masses. El-Baradi is being touted as a leader of the crowds in the imagination of the media only.

I feel that the moment of greatest danger will come when the puppet goes. All else to date is merely passionate theatre and the leverage needed to bring about that outcome. Then we shall see what slithers from the shadows to accept the grateful appreciation of the money masters.

If the protestors return to their homes all that will have been accomplished is a letting off of stream. The elites will have their wish and the next stage in their plans will progress. The protests must continue and hold that newcomer to the agenda of the people.

Here we are treated to 24-7 coverage and breathless interviews ‘live’ from the scene of the drama. As others have asked - why? These events have been provoked for a wider purpose and we are about to be shown a pre-determined outcome. An example is being made and we are encouraged to watch to ‘learn our lesson’.

There are lessons being learned and they aren’t the ones intended. The people on the streets have remained peaceful and have resorted to self defence only. The tactic is one of open non-cooperation. Occupying the streets and key locations - and staying there – disrupts the normal operation of the state.

The technically literate circumvented the Internet blackout. The blackout has since been lifted demonstrating the success of those efforts. The secret squirrels can’t monitor the chat when it goes off their official networks. Many across the web have taken note and many ideas and preparations are being discussed if that gets implemented elsewhere.

Take note of these things as they will prove useful. A protest march solves nothing. In many battles it is the taking and occupying of strategic ground that determines the outcome. Planning for alternative internet connections might be advisable such as buying an old style dial-up modem.

I will watch and pray for the people of Egypt. Despair or hope awaits and the divide between the 2 will affect all. I expect a sucker punch may arrive from off-stage if events are not turning out as planned. With Israhell as a neighbour treachery should be anticipated.
Posted by chuckyman at 12:47