A Frightening Strategy for Israel 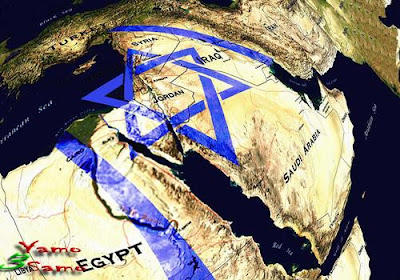 Noor has asked to help bring this article to a wider audience. I agree wholeheartedly as it clarifies the bigger picture of the events we are witnessing unfold in the Middle East. Please feel free to repost and give credit to tireless Noor. Thanks again to her for all her hard work.

This article full of important information is a "must read" for anyone wanting to understand Israel's intentions in the Middle East. In fact, people in the upper echelons of Israel are not pleased about its being translated and being made public knowledge. You will see why. Please also read my previous post EGYPT WHAT A MESS. There is also a video there outlining in greater detail what you are about to read. I believe this information should go viral because it will open many eyes. I also provide links to the references mentioned in this writing.

The other day I was handed the translation of a paper written by Israeli journalist Oded Yinon as far back as 1982. Ah! Old news, I thought. I'll get around to browsing through it one of these days. When later, the person who proffered the document, asked me about my conclusions, I grabbed my spectacles and sat down for what I thought would be a dull read. How wrong I was!

Yinon, who was attached to Israel's Foreign Ministry, published his paper, titled "A Strategy for Israel in the 1980s," in Kivunim (Directions) a "journal for Judaism and Zionism," and if the Association of Arab-American University graduates hadn't widely distributed the article, it might have disappeared down the memory hole.

Unfortunately, as the document is 11 pages long, I can only give you the gist but it can be found in its entirety on the Internet.

The basic premises of the plan are these: In order to survive Israel must become an imperial regional power and must also ensure the break-up of all Arab countries so that the region may be carved up into small ineffectual states unequipped to stand up to Israeli military might.

Yinon described the Arab-Muslim world as "a temporary house of cards put together by foreigners and arbitrarily divided into states, all made up of combinations of minorities and ethnic groups which are hostile to one another."

He then goes on to predict that some of these states face ethnic social destruction from within "and in some a civil war is already raging."

The writer goes on to bemoan Israel's relinquishment of the Sinai to Egypt under the Camp David Peace Treaty due to that area's "oil, gas and other natural resources."

"Regaining the Sinai Peninsula is therefore a political priority which is obstructed by Camp David . . . , he writes . . ."and we will have to act in order to return the situation to the status quo which existed in Sinai prior to Sadat's visit and the mistaken peace agreement signed with him in March 1979."

Yinon then predicts that if Egypt is divided and torn apart some other Arab countries will cease to exist in their present form and a Christian Coptic state would be founded in Upper Egypt. (I always wondered why Egypt was referred to as 'the prize' in a 2002 Rand presentation to the Pentagon at the behest of chief neo-conservative and friend of Israel Richard Perle)

Now how about this?

"The dissolution of Syria and Iraq later on into ethnically or religiously unique areas such as in Lebanon is Israel's primary target in the long run, while the dissolution of the military power of those states serves as the primary short term target," he writes.

"Iraq, rich in oil on the one hand and internally torn on the other, is guaranteed as a candidate for Israel's targets," says Yinon. Its dissolution is even more important for us than that of Syria. In the short run it is Iraqi power which constitutes the greatest threat to Israel."

"Every kind of inter-Arab confrontation will assist us in the short run and will shorten the way to the more important aim of breaking up Iraq into denominations as in Syria and Lebanon. In Iraq, three or more states will exist around the three major cities: Basra, Baghdad and Mosul."

Remember that Yinon's paper was penned in 1982.

But the writer also makes grave mistakes of judgment. For instance, he felt certain that both Jordan and Egypt would revert to Nasser-style Pan-Arab philosophies and break their treaties with Israel, which was what Yinon hoped they would do. But it didn't happen.

Yinon further predicted "there is no chance that Jordan will continue to exist in its present structure for a long time and Israel's policy both in war and in peace, ought to be directed at the liquidation of Jordan."

This was because Yinon wanted to see the transfer of Palestinian Arabs from the West Bank into Jordan. "It is not possible to go on living in this country in the present situation without separating the two nations, the Arabs to Jordan and the Jews to the areas west of the river," he says.

Was Yinon's paper the precursor of the 1996 "Clean Break: A new strategy for securing the realm" document authored by current and former Bush administration leading lights, such as Richard Perle, Douglas Feith as well as David and Meyrav Wurmser on behalf of Benjamin Netanyahu?

It was also proposed that Syria should be isolated and surrounded by a friendly regime in Iraq, while Arab states should be challenged as "police states" lacking legitimacy. Isn't this exactly what is happening today as part of Bush's democratization policy?

Richard Perle -- who journalist and film-maker John Pilger describes as one of George W. Bush's thinkers -- later pops up again in the 2000 Project for the New American Century document, which lays out the neocon vision for US domination of the land, seas, skies and space.

Pilger writes in December 2002: "I interviewed Perle when he was advising Reagan; and when he spoke about 'total war', I mistakenly dismissed him as mad. He recently used the term again in describing America's 'war on terror'. 'No stages,' he said. 'This is total war. We are fighting a variety of enemies. There are lots of them out there.

"'All this talk we are going to do Afghanistan, then we will do Iraq . . . this is entirely the wrong way to go about it. If we just let our vision of the world go forth, and we embrace it entirely and we don't try to piece together clever diplomacy, but just wage a total war . . . our children will sing great songs about us years from now'."

Those children that survive, maybe, but I'll bet that Perle and gang are far more likely to go down in the annals of history alongside mankind's most brutal, ruthless and self-serving.
Linda S. Heard is a British specialist writer on Middle East affairs. She welcomes feedback and can be contacted by email at heardonthegrapevines@yahoo.co.uk.
Posted by chuckyman at 10:48