Most people have heard of the Goldstone report. It’s a troubling wee document that’s only 2500 pages long. It documents the recent horror inflicted on the prisoners of the Gazan Gulag. Check this for a timeline of the slaughter.

The report was prepared by a former South African judge, Richard Goldstone. He is an internationally respected jurist and war crimes prosecutor. He is also Jewish,a self proclaimed Zionist and supporter of Israel. So what’s the problem then? Is it the usual whitewash we have come to expect?

What the report does state is that the Israeli leaders and their military were guilty of war crimes. The report does also condemn the Gazan’s for their indiscriminate use of fireworks. Richard Goldstone had the bravery to bear witness to the actions that took place last winter, a mere 2 days after Christians celebrated the birth of Christ. I wish to salute him for loudly telling the world what happened. He has paid a huge price for that bravery.

For many of us the imagery of those days is fading. The anger cannot. Who was it said that we must never forget? I have struggled with the decision to post the following images. I too am a father so I ask forgiveness from those captured by these images.

I ask whomever reads this to look around at your family, friends and neighbours. Ask how you would feel if foreigners invaded your land and subjected you to this - for 60 years. 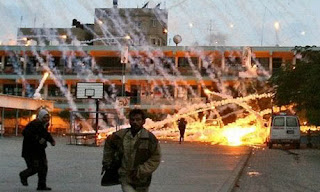 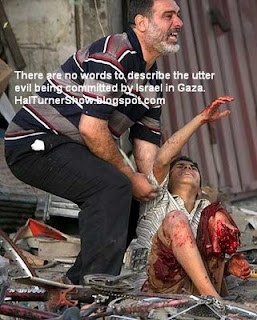 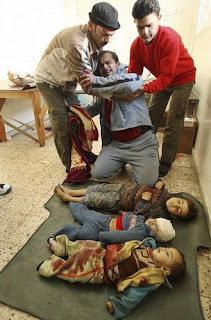 Finally, if these photos are not horrific enough, this eye witness account never made it into the report
Posted by chuckyman at 10:54