Well I guess I’ve been AWOL long enough then.  I did actually take some time off with the family as I think we all need to charge the old mental batteries.

Boy it was hot by Irish standards - 30C (85F).  That almost never happens we’re told – except every solar cycle (11 years).  It’s been an interesting summer in the Northern Hemisphere.  The Danube, Rhine and the Yangtze rivers have all run to record lows.  All major logistics channels and all running low – the world is in peril!!

This is nothing new but the timing is interesting. ‘Hunger’ stones have been uncovered in the low waterways warning of coming hardships.  Beware!!!  Doom, Famine and Winter cometh!!  These inscribed stones warn of impending doom – and always have done for centuries!

Summer - like shit – happens.  No one mentions the horrific snow and cold in the opposite hemisphere and in unusual regions this year.  Weather happens.  But if we surrender tax authority to faceless technocrats then we can fix it!!

What about energy/heating.  Well we are reliably informed we’ll be spending 1000’s per month (insert currency of choice).  Not likely as none of us have that kind of money.  There were brief rumours that us uppity slaves might just refuse to pay those bills.  Thankfully big tech made those silly ideas disappear.

Food is the next horror story we are told.  Supply disruption, fertilisers, poor crops, avian flu killing chickens. Don’t even mention the destruction of food processing plants.  Next it’s the logistics.  We can’t get the chips/parts etc.

See the trend?  I DO NOT DISMISS the message we are being given. I query the collective message.

Yes the food processing plants were destroyed in places

See the trend – in places.

We need to beware the drop in meat prices they say.  Farmers are reducing their herds and meat is cheap – for now.  Next year we will have real shortages of meat/protein.  Meanwhile bug flour is silently being included into ingredients. ALWAYS read your labels!

I do not wish to underplay the serious challenge that the impending autumn and winter will bring.  I have laid in what food and fuel I could in advance as I always do but only time will tell. If you have not done you preparations already, you are a statistic waiting to happen.

What I do object to after the recent few years of media hysteria are continuing headlines of pure fear mongering.

Food security is important.  However, I believe the fear itself is much worse than what the coming events will bring.  Over at Noor’s place she broached a very interesting thought;

“There are beings in the spiritual realms for whom anxiety and fear emanating from human beings offer welcome food. When humans have no anxiety and fear, then these creatures starve. People not yet sufficiently convinced of this statement could understand it to be meant comparatively only. But for those who are familiar with this phenomenon, it is a reality. If fear and anxiety radiates from people and they break out in panic, then these creatures find welcome nutrition and they become more and more powerful. These beings are hostile towards humanity.

Everything that feeds on negative feelings, on anxiety, fear and superstition, despair or doubt, are in reality hostile forces in super sensible worlds, launching cruel attacks on human beings, while they are being fed. Therefore, it is above all necessary to begin with that the person who enters the spiritual world overcomes fear, feelings of helplessness, despair and anxiety. But these are exactly the feelings that belong to contemporary culture and materialism; because it estranges people from the spiritual world, it is especially suited to evoke hopelessness and fear of the unknown in people, thereby calling up the above mentioned hostile forces against them.” ~ Rudolf Steiner

It’s not new to me and if you know what an egregore is – well then.  You have an enemy that literally feeds off your fear.  Only the stopping of that fear helps you to overcome that enemy.

The herd is being stampeded into accepting totally unacceptable outcomes.  Those outcomes will not benefit us at all and are certainly not inevitable.    The idea of ‘It’s The Only Way’ is BS agenda control. The Hegelian problem, reaction, solution.

Eating bugs is not only disgusting it is also meant to be humiliating.  They are mentioned in the Bible as unclean and not fit for consumption.  In a similar vein, the attempt to bring into mainstream discussion the idea of consuming human meat, cannibalism, has begun.

I remind everyone to know your enemy.  His symbols are everywhere and often right in front of your face.  If you have made it this far without the clot-shot then you still have a chance.  They must persuade us to give up our freedoms and even our souls. By their rules it must be made to seem voluntary.

Always remember that no matter what we all still have a choice - to accept or reject.  I reject the perversion, sickness and depravity that media is ramming down our throats 24/7.  I refuse to let them frighten us like wayward children.  They can stick their digital ID/currency up their arse.  My personal pronouns are up/yours.

I've used this before but it still fits. 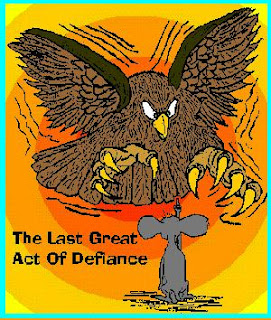