I Come To Praise Gaddafi, Not Bury Him

The man is dead they all say - long live the legend. Our lying eyes have seen the footage and even the online pundits ‘concede’ the point. I briefly watched the first video and closed the browser. Whatever was taped I didn’t want to watch any more for the sake of my own soul.

What spastic, cold-turkey junkie prick took the initial video I’ll never know. The quality of the video was the same crap we have seen disseminated time and time again to spread the lies of the so called Arab Spring. Remember also that Saif al-Islam Gaddafi has made more comebacks than Sinatra. Lazarus would be jealous – he only got to come back from the dead once.

I seem to remember that they stopped the crystal clear footage after the Green Square footage was shown to be a set in Doha, Qatar. Other scenes were of a crowd in India. Once ‘Mission Accomplished ™’was declared the hired guns of the western media pissed off back home. If they magically produce some clearer stuff I will remember the fake footage produced after Israhell’s murders got outed in their rampage on the Mavi Marmara.

Enough of the forensics – suffice to say that I don’t believe one single fucking word or image we get forced down our throats here in the liberated ‘West’.

They said he was a brutal dictator. Maybe he was. The Americans were seemingly happy to ship some of their torture-for-hire jobs his way. As a wee side note Assad of Syria would pick up some of that work for the US of I also. That’s how they can prove he was such a bad guy – he was doing some of their dirty work.

All the little favours called in to cement our allies in the ‘War Of Terror’. Like getting made in the mafia movies – enough said without discussing the real kosher nostra. Remember Saddam had lots of really bad ass weapons of mass destruction once upon a time. We know this because Rumsfield sold them to him. Ditching said weapons didn’t work out so well for him either.

What did this tyrant ever do for his people? Free Health Service, free University tuition even if you have to go abroad to get it, grants for anyone to farm the land, a wedding gift of thousands of dollars for newly weds and a bonus for each child born. Food and petrol cost mere cents or pennies if you prefer and 50% subsidies on new cars etc, etc – what a bastard!!

He built a massive water network to distribute water from a huge underground aquifer to make the desert fertile – it was to be the 8th wonder of the modern world.

I didn’t know until yesterday (thanks AP) that he also financed the first African telecom satellite – for Africans. No more bender-over fees to the big western networks for African countries.

He wanted to set up a gold backed African currency that would free Africa from the modern debt slavery of the IMF and the rest of the Rothschild controlled vampires. He was only going to sell his high grade oil in the currency of the new African Dinar… what a complete bastard!

Look around you and think - how many people would sell their mothers or their children for that kind of regime right now? How many of the growing tent cities and modern Hoovervilles – if you even know of their existence – could be removed with such a tyrant? Do you see a link…any link?


On a serious note when was the last time an elected representative in your corner of the world actually made your life easier in a fundamental of life… when? We live in ‘democracies’ because the PTB learned that the sheep are quieter in such work camps and when they are distracted by such theatre.

In the current times X factor, XX Idol (for XX - add country of origin) and celebrity gossip substitute for valuable public discourse. Politics and economics are boring… quick Britney is on the other channel… twitter just said that Yo’ mama is really an alien… check out the abs on……..

I remember when free people lived in Republics. Democracies are frightening places – go read Plato. The read monsters certainly did.

Bullshit and sarcasm aside - the more I heard about the man the more I understood why he had to go and 50,000 Libyan civilians had to die with him – so that the civilians would be safe… safe to be enslaved like we are.

Of course he was portrayed as mad. From the mindset of the pimps and whores in positions of perceived power he was. When you have dial-a-Thai-ladyboy on speed dial the idea of improving the lot of your clan/tribe/country is ludicrous. More coke with that your highness?

WE KILLED HIM. Each and every one of us. What did we do to stop it? Sweet Fuck All. We marched like good sheep to stop Iraq and that worked out alright didn’t it? Only a million dead – give or take a few hundred thousand. Not one march to halt the rape and decimation of Africa’s richest nation after the ‘West’ had previously extended the hand of peace. We did this because we did nothing to stop it and the current carpet bagging of the remnants. 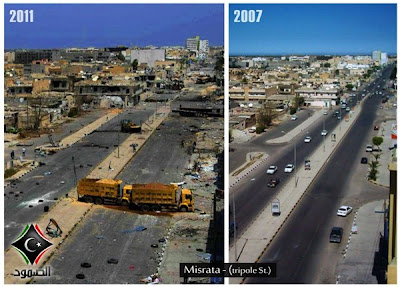 The vile monsters like Billiary Clinton (deliberate spelling) are there because of us. They, like Obama, Sarkozy and that bloated buffoon (prick is reserved for Blair) Cameron live in our ‘sphere of influence’ – where we live for the stupid.

We can camp out and stand and shout. That’s one approach. We can do lots of things to gum up the works. It matters not a jot if we aren’t doing anything except jerk off at a keyboard. The banksters own us lock, stock and barrel – look up the meaning of that some time – hint it’s about guns and the guns are pointed at us.

We can piss and moan that the good leaders get killed - Ghandi, Kennedy, ML King, Malcom X etc because of the money power of the Rothschild and their khazar, rabbi minions that run the show for them. There have been many good leaders that came and died because we have not been ready for the message of what they face and followed through. They knew and they tried anyway.

Moammar Gaddafi may lie in an unmarked grave or may be resting in a villa somewhere in a sympathetic country. It makes not one jot of a difference. The guilt is ours and we can only remove that guilty by making sure the real guilty parties answer for their crimes. Add that to the list of things to do when we get off our arses. 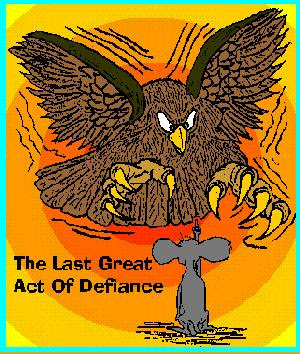